SLOW BOATS TO CHINA by Gavin Young, originally published in 1981; my (lovely) edition 1995

Some travel books, though, make you want to leap off and emulate the author immediately.

And some do not – and this is one of those.

That’s not, of course, to say that it’s a bad or even indifferent travel book, because it isn’t; it’s wonderful (or at least, I think it is). But I am deeply grateful that I wasn’t in any way involved with most of Gavin Young’s 1979/80 journey. It was a romantic dream of sea travel, of taking a succession of ships and small boats all the way from Europe to China, something that was barely possible at the time, and which is even less possible now. But Young managed it, and indeed even went on to write a sequel, Slow Boats Home. And if anyone could do it, he could.

Gavin Young was born in 1928 and worked for a large part of his life as a foreign correspondent, covering a total of fifteen wars. He started in journalism as a stringer working out of Tunis, and before he joined the Observer he worked for two years with a shipping company in Basra, and then spent a couple more years with the Marsh Arabs nearby in southern Iraq. His journalistic career was marked by revolutions and conflicts, and he was 1971 International Reporter of the Year for his coverage of the traumatic birth of Bangladesh. All of this certainly prepared him for his later life as a travel writer, particularly one with a marked interest in the East. His ability to get on with a wide variety of people, and his persistence and flexibility when travelling, are certainly reflected in the journey which resulted in Slow Boats to China.

It is perhaps surprising, given such a career, that he comes over as such an incorrigible romantic…

The whole idea of the journey sprung from childhood memories of the north Cornish coast and consequent dreams of running away to sea. Young decided he would take whatever ships were available – it’s been described as ‘a sort of traveller’s roulette’ – and make his way from Piraeus to Canton as best as he could. From disgusting ferries in the Mediterranean to kumpits in the pirate-infested Sulu Sea, he managed it (and only rarely had to resort to alternative means of transport).

En route he met many interesting individuals – a cliché of the travel book, but Young’s reporter’s eye and ear make the most of all his encounters and the same cannot be said of some other books in this field – and enabled his readers to share in many experiences, but virtually: always more comfortable. I certainly hadn’t the slightest desire to spend precarious time with Moros in the Sulu Sea (though I now have a good piece of advice should I be in fear if my life in similar circumstances: keep smiling), and I still haven’t – but Young’s account makes me understand what it must have felt like. His writing is extremely evocative, and time and again the romantic surfaces, though not in purple prose: he was, after all, a war reporter.

Young died in 2001, six years after Slow Boats to China appeared as one of the Picador Travel Classics. 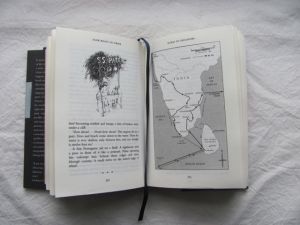 It’s a lovely edition, though the illustrations and clear maps have appeared in all editions – and the maps are excellent (it’s a shame that the same cannot be said of all travel books). His later book In Search of Conrad was joint winner of the Thomas Cook Travel Book Award, but I much prefer Slow Boats.

THE P-P-PENGUIN by Patrick Campbell, published as a collection in 1965; original journalism published between 1954 and 1965

I used to search out Paddy Campbell’s books in second-hand bookshops, but this is one I inherited – which may explain its rather battered condition. I’ve since found another copy, but heaven only knows where it is…

For my money Patrick Campbell was one of the funniest writers in the English language, and one of the few people who could make me laugh so much that I’d become helpless. If I was unwise enough to be drinking tea at the time, it would come down my nose.

But I was intrigued when the dice gave me this. Some of the pieces in it are well over 50 years old.

Would I still find them funny?

Some people may remember Campbell as one of the team captains on the old TV show Call My Bluff – the tall, thin Irish one with the stammer. For me, growing up, he was the only reason why my parents tolerated the Sunday Times. 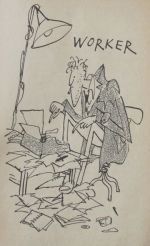 It took me a while to find him as funny as they did, which isn’t surprising; he didn’t write for ten year olds. We weren’t alone in our admiration: one reviewer of the time described him as ‘the funniest displaced Dublin journalist at large in London so far.’

Campbell, born in 1913 to an eminent Irish lawyer and his wife (and into a noted legal family) showed no inclination whatsoever to follow in the family footsteps – probably just as well, given that their tendency to become involved in politics got them held up at least once by the IRA. Instead he ended up on the Irish Times under the eccentric editorship of Robert Smyllie:

‘I stumbled on the only job that required no degrees, no diplomas, no training and no specialised knowledge of any kind … journalism might have been designed for my special benefit.’

(Smyllie, incidentally, also recruited Flann O’Brien to the paper.) Campbell was at there for many years both before and after the War, which he spent in the Irish Marine Service. He then migrated to London, and wrote for other papers including the Sunday Times. As time wore on, he began to appear on television, where his characteristic stoop and even more characteristic stammer made him instantly recognisable. In 1968 – by then he’d inherited his father’s title and was officially the 3rd Baron Glenavy – he moved to a farmhouse near Grasse, which is where he died in November 1980.

The P-P-Penguin is one of many collections of his columns; apart from 35 Years on the Job, this is the one which covers the widest range in time. It is divided into broadly themed sections – the Quentin Blake illustrations are from the start of two of these – and within each section are between five and ten pieces. One of the longest sections – The Aesthete – deals with his cultural confusions, best summed up in the title of one: ‘Brünnhilde is Wotan’s Uncle’, in which he attempts to unravel Wagner’s Ring Cycle.

Quoting Paddy Campbell is invidious, really. He wasn’t a man of one-liners, though his descriptions can be succinct – once he had to act as a sub for a sports reporter who had a win on the horses, passed out and been taken home ‘…the victim in equal parts of surprise, and nineteen bottles of stout.’ Instead each piece builds incident on incident and witty turn of phrase on witty turn of phrase until, in the best of them, you are almost hysterical.

For instance, there’s his alternative Christmas game, a substitute for endless, desperate, grim charades. This is ‘Mother, I’m back!’,  invented in extremis – ‘…if we want to act – and who doesn’t at two o-clock in the morning…’ – in which participants have to enter the room and greet their long-lost mother in suitably melodramatic style. Fine until the person playing Mother gets fed up… And what about his attempts to join the breadmaking revolution, or master military commands in alleged Irish? Excellent.

And my overall conclusion? Well, I still laughed wildly at some pieces, but others – no, not so much; they’re just a bit too dated, well-written or not. A newspaper column is an ephemeral thing – tomorrow’s chip wrapper – and some of these are straining a little. I think that 35 Years on the Job is a much better, more representative and balanced selection of his journalism – which is not surprising. After all, Campbell continued writing well after The P-P-Penguin was published, producing some of his funniest and most moving pieces then. If you can find that book, lurking in a second-hand bookshop or chez Abebooks, get it. Otherwise – well, yes, there are some good things here. But it’s not as consistent.