When I bought this book, I could barely afford it. I was a baby bookseller, and anyway the book industry has never been noted for lavish (or even sustainable) levels of remuneration. Even with staff discount, I had to save up. But it was worth the money. It’s a superb collection of photographs taken in, roughly, the ten years following the end of World War II, by some of the best photographers of the last century. And probably this one, too.

It’s strange to think, now that – as Grayson Perry put it in his recent Reith lecture – photography ‘rains on us like sewage from above’, just how powerful the photographic image was, and not all that long ago. It can still be incredibly strong, of course; it’s just that it can be difficult to pull the powerful out from the welter of everything else. Not so, once upon a recent time. 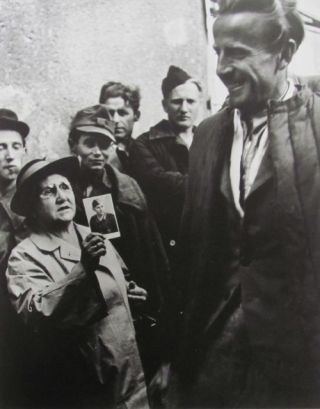 In the aftermath of WW2 a group of photographers (photojournalists, I suppose) met in New York and talked about forming a different sort of photo agency, a co-op – Henri Cartier-Bresson, David Seymour, Robert Capa, George Rodger and William Vandivert. The last named dropped out; Rodger was often away and that left the other three founder members, so Paris became the base for what was to become the most famous photo agency ever: Magnum. Gradually many others joined, some of the most illustrious photographers around, and the same is still true today. (And today, 22 October, would have been Robert Capa’s 100th birthday – a happy coincidence.)

Some of the photographs in this book date from before 1947, but the aftermath of the war very much informed Magnum, especially in its early days, and many of the shots included here come from that immediate post-war period. 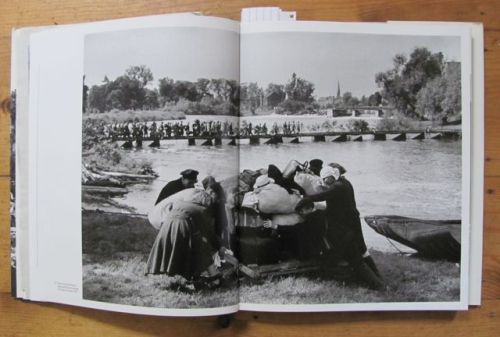 They show the wreckage of Europe, described as being ’empty, quiet and it stank’. The word ‘peace’ had a hollow ring for many of the Magnum photojournalists; apart from anything else, the war in Indochina kicked in in 1946, and the reality of a Europe with 30 million refugees was never far away. Hindsight gives a terrible reality to images like the one above – what awaited the refugees there was not known when it was taken, of course, though many people suspected the worst. 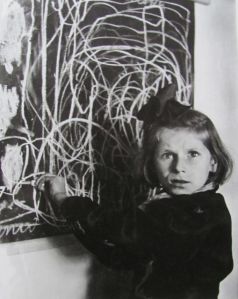 Others do not need hindsight; the traumatised child photographed by David Seymour in Poland in 1948 – the title is ‘disturbed orphan drawing her home’ – is powerful enough. You don’t need to know what this girl has been through in any detail (probably just as well) in order for the image to have a powerful impact; it bears witness all by itself.

If there is any one theme that runs throughout this book, it is people. People, their strength, their resilience, even though they might be ‘swept along on the winds of history’. And of course not all the photographs are of war; as time goes on there are portraits of famous people, shots of artists (Picasso, Matisse, Giaciometti), writers (Colette – and her maid – or Francoise Sagan or Simone de Beauvoir), singers and actors (Jaques Tati, Maria Callas). 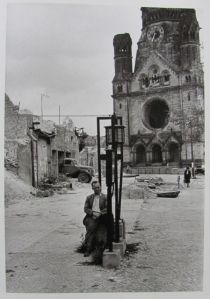 For me, though, it’s the ‘ordinary’ people, the prostitutes working in 1947 Essen (David Seymour); the women chatting in Paris (Werner Bischoff, Ernst Haas) or coralling children in Naples (David Seymour) or  being chatted up by British troops in Berlin in 1945 (Robert Capa). The dignity of everyday, ‘normal’ human beings is expressed in shot after shot, such as this one by Henri Cartier-Bresson of the Kaiser Wilhelm Memorial Church in Berlin, taken – amazingly – in 1951.

So when does ‘post-war’ end? The photographers had different answers. For Ernst Haas, it was the early 1950s when he began taking his famous colour shots. For Inge Morath, it was the day in 1959 when she was unable to park her car in Paris because there were too many others using the available spaces. Henri Cartier-Bresson defined it as the 1958 Brussels World Fair, which he shot and where he ‘scented hope’ – but, he said, he felt wary because he thought photography was a way of feeling a pulse, of sensing things in advance, of metaphorically sniffing the smoke in the air which becomes a blazing fire. He went on to say ‘…the world had been totally changed by scientific discoveries made during the war. These technological changes became a part of our lives, creating deeper and deeper tensions so that we are in a world that seems headed for suicide.’ Prescient, or what?

One final note: this is a beautifully edited book (says moi, ever the editor). Time and again photographs are shown in parallel, but in an understated way that informs and doesn’t distract. Take this pair, 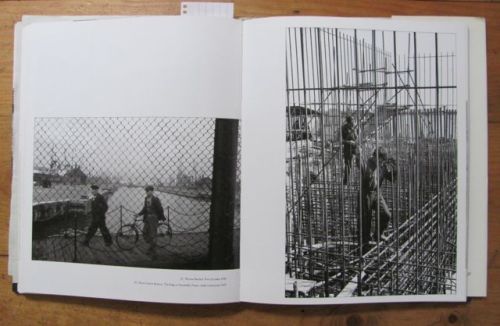 Boy, am I glad I saved up my pennies and didn’t spend them all on beer.