A PHOTOGRAPHER IN OLD PEKING by Hedda Morrison, published in 1985 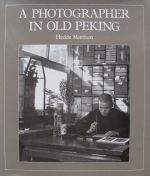 It’s very strange. This ‘reading what the dice select’ exercise has thrown up some oddities, and in this case it’s given me a book I cannot recollect buying. I can’t remember it at all, though I have a vague recollection of finding some books on China in a second-hand bookshop when I was on holiday once. I wonder if this was one of them? It’s been driving me mad. After ages in the book trade, I do not forget books.

Er – except I evidently do.

The next thing that baffled me about it was why I’d not shelved it with my photography books. And then I opened it, and I knew why (so I’d evidently looked at it at some time to make the assessment). There’s a fine line between a photograph which is simply a document and one which has artistic ambitions, and sometimes time alone is enough to cause an overlap. Sometimes it isn’t – and there’s nothing wrong with documenting what you see, of course.

For me, Hedda Morrison’s photographs fall onto the documentary side. What is most interesting about them is the time and place, not the composition, lighting, thought processes. But that was probably inevitable, given the circumstances in which she worked…

Hedda Morrison went to Peking in 1933. A German national, she ‘was anxious to work overseas as I had no sympathy for the Germany of the time’, and answered an ad asking for someone to take charge of a German-owned photographic studio in China. 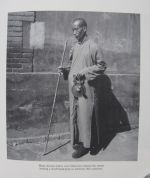 Her family saw her off in 1933 a little apprehensively – really, Hedda? – and gave her protective gifts: an umbrella and a pistol. The way you do. Her contract was for five years; she stayed on, finally leaving in 1946 when she got married. (I know all this because A Photographer in Old Peking isn’t just a collection of photographs; there is plenty of background text to set both the shots and the photographer in context.)

Most of the time she used Rolleiflex twin-lens relax cameras, which were ‘perfect’, she says – but the same could not be said of the flash available, of course. It could be dangerous, and on one occasion she did manage to set herself alight, so there are not many shots of interiors. As a result she had to either work outside or ask people to keep as still as possible. This is part of the reason why so many of the photographs look rather carefully posed: they were. 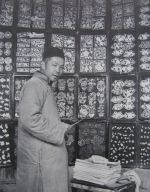 But they are often fascinating, too. The cut-out maker, surrounded by his delicate stencils (‘in a multitude of patterns, for home and window decorations’) is one example, and there are many others. The text is a mixture of informative – and occasionally slightly didactic – and atmospheric. Morrison manages to conjure up the atmosphere of pre-War Peking – streets sounding with the noises of hawkers’ clappers; funerals and weddings; lofts of pigeons; crickets in cages, night-watchmen patrolling the streets. And very, very, very different streets (not many camel trains). She isn’t romantic about it, however. 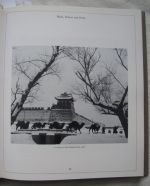 They seem to belong to an unchanging China – a complete illusion – though one, of course, which was about to undergo the most massive change which no-one could fail to notice. When Hedda Morrison went back (which she did in 1948 and then, later, in 1979 and 1982), she was stunned by the extent of the changes, even though many significant ones had already begun while she was already there.

Despite appearances, her China was not an imperial one; the Forbidden City was already largely open to the public. But the later developments were massive, and it’s one thing knowing about them in theory, but it’s another being confronted with the reality. And for a photographer, the most significant one must have been the pollution, as she laments: ‘the brilliant light of north China has lost its shine to a layer of smog.’ But ‘change had to come and I have no doubt that the people today are infinitely better off and live under a much fairer system’. Check out the photograph below, and the size of the woman’s feet, for instance… hmm. 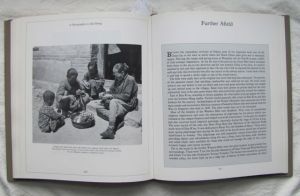 2 thoughts on “A vanished world”